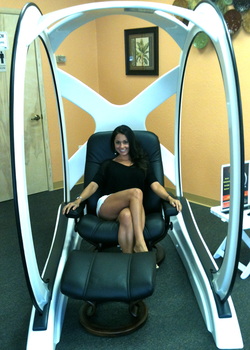 Recent university-based scientific studies have revealed that matter and space communicate through magnetic resonance.  Extremely low intensity magnetic fields, found naturally in the human body, and predicted by the unified field equation of Jacobson Resonance have been shown to exert profound effects on living systems.

The discoverer of Jacobson Resonance, Dr. Jerry I Jacobson, biophysicist and inventor, maintains that there is no such thing as empty space.  All space is filled (even a perfect vacuum) with an infinite sea of extra- dimensional energy that may be physically undetectable.  The link between matter and space is a gravity wave, predicted by Einstein; and these extremely weak magnetic signals (billions of times weaker than MRI) produce gravity waves on microscopic (quantum) levels.  Indeed, these magnetic forces represent a quantum gravity.

In his new book, "Reason for Life," Dr. Jacobson states: "It is obvious that there is no such thing as absolute space or emptiness, if all things, everywhere, are incessantly affected by gravity, which has to be something.  After thinking about what leads to the idea that an infinite number of things are never directly seen, heard or felt, one realizes that there has to be a universal order, that is, everything must be arranged this way.  Since there are an infinite number of things apparently avoiding ostensible touching, such an order could not happen by chance, but by design... And, the purpose of life must be to serve the Creator's intention, by holding the integrity of life sacrosanct.